Hounded: Stories from the American Road 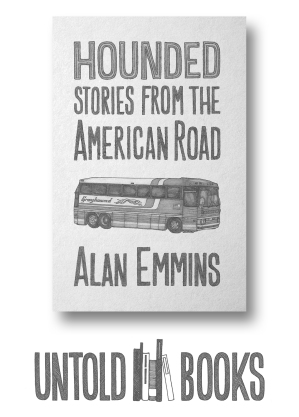 The five stories in HOUNDED are simple portraits of American icons.The heroes are made of flesh, blood and tarmac.

The baddies are the result of 200 years of failure and success, made possible by a loud history of disgrace and glory.

None of them could have been made anywhere else.

Eighteen-Wheeled Entrepreneur follows Jake, a truck driver who lives in the cab of his Kenwood truck for extended periods of time. It’s a pure road story, a glimpse at a global profession performed in a very American way, using very American tools.

The Amethican State has one meth manufacturer losing his leg in a getaway accident and another being engulfed in flames as her van-come-meth-lab explodes while she is inside. But in essence it’s a story of an entire town, bereft of its industry, in the grip of addiction.

Hounded was always meant to be a fun story about crossing America on a dime. But as is often the case with real stories, it took on a life of its own. Of all the stories, with its lack of drama, it is potentially the most desperate and the most fearful.

Prices on Heads goes behind the scenes of a lesser experienced profession, that of Bounty Hunting. In some ways another classic road story, mixed with equal parts adrenalin and drama, in other ways a story of human tragedy and kindness.

Don’t Go To Gordy’s is not an article in and of itself, it’s more of a behind the scenes piece. Nine times out of 10, when working on an feature story, you walk away feeling like it was a positive experience for everybody involved. This is not one of those occasions.