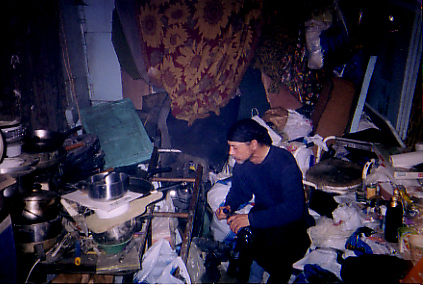 The trolley is stowed in a dark corner, out of view from train drivers and passengers as they clatter through the Freedom Tunnel. JR picks up a ladder that is lying on the ground and leans it against the wall with a swift, practiced motion.

‘Wait there,’ he tells me as he gathers some of his shopping bags and mounts the ladder. It creaks under the strain. As JR climbs, the bags bounce off his legs and hips. JR keeps climbing. Every rung of the ladder needs to be used. At the top he swings the bags up and into the darkness of a small entrance before he descends and hands me two more.

‘When you get up there, just stand still and away from the edge, then when I get up I’ll let us in.’

At the top there’s a thick metal handrail made of tubing. JR grabs it and pulls himself up onto the ledge, pushing me a little further into the darkness. He doesn’t poke his head back out to see if anybody is there, or if anybody was watching us as we climbed. He simply turns and with another of his practiced actions lowers the ladder back to the ground with a cord he has attached for that very purpose. Now we stand in the dark entryway. His reception area.

A heavy blanket hangs on the left wall. Beneath the blanket there’s a rug. JR pulls both back to reveal a large square hole. He reaches in and gropes the inside wall until his fingertips touch a cable. He tickles his way along the cable to the switch and turns it on.

And then there is light.

‘OK, in you go, just hop on the wall and then walk down the ladder.’

I do as he says, though I don’t make it look as easy as JR makes it sound. The wall is quite high and I have an embarrassing moment where I try to scramble over it, eventually only managing with some assistance from a laughing JR.

JR, considerably shorter even than me, swings his left leg up into the hole in the wall with ease.

On the other side is another smaller ladder. It is positioned like a ramp, leading up to the square portal. The ladder is partly covered with fabric, more blankets and rugs.

I hold my breath for a second.

JR doesn’t notice the smell any more. But to me the smell is strong, a mixture of food, sweat, smoke, feet, dirt and excrement.

On the immediate left, tucked into the corner, I see a white plastic garden chair. There’s a hole cut into the seat. Beneath the hole is a bucket. Next to the bucket are four extra-large water bottles. They are filled with a foggy, yellowy liquid that appears to have random brown shapes floating about inside.

JR puts his shopping down.

The room is about ten feet wide and twenty-five feet in length with a ceiling that must be fifteen feet high. There is stuff everywhere.

Plastic shopping bags that bulge in different shapes and sizes are spread all over the floor. All of the bags are tied at the top, with a simple little bow. Most of the bags are adorned with the red and blue Duane Read logo stretched out of shape. It is not possible to know what is in each bag. Even JR doesn’t know.

‘I mean, my guess would be food and clothes – mostly – and you know – stuff.’

For June the room is surprisingly cool.

‘I got the place insulated about three months ago. I passed a site where they were in the process of renewing the insulation, so I got the old stuff for free. It works great too. I got it going all around. You can see it on the ceiling. Keeps the heat out in the summer and keeps the cold out in the winter.’

Fabric hangs on most wall surfaces. A huge maroon-coloured duvet cover is draped over the exit. It is splattered with sunflowers of many different sizes and hangs crooked to where it rests on the ramp. The back of the room is split into two levels. A wooden ladder leads to the upper level, which is JR’s sleeping area. The lower level serves as a kind of living room. There’s a two-seater sofa pushed up against the left wall, mostly covered with dirty clothes and porn magazines. In this living area, two different fabrics have been chosen to add homeliness to the dwelling. On the left wall, behind the sofa, is a seascape fabric. Blue and turquoise waves are littered with fish: yellow fish turn back on themselves; pink fish with blue zigzags swim from left to right. The back wall is covered in a big square of deep-red velvet. It hangs from ceiling to floor like a stage curtain, the row of multi-coloured Christmas lights that run along its top only adding to this impression.

Two pictures – watercolours on card – are pinned to the top of the red velvet wall. The first is of a faceless woman tending a vineyard; the second is a landscape of a pretty European village. Other homely touches include a circular mirror framed in gilded metalwork, a Monopoly board game and a copy of last month’s Playboy.

Along the right-hand wall are cabinets and shelves. There’s a stereo, a stack system with a turntable, two tape decks and a radio. In the middle of the wall there’s a plastic shelving unit holding condiments: salt, black pepper, ketchup, mustard, honey, vinegar, oil, peanut butter, hot sauce.

There is no free space in the room. All flat surfaces have items stacked on them. The small table next to the sofa holds a lamp, an empty vodka bottle, an ashtray, five light bulbs and a medium-sized indeterminate sculpture. All surfaces hold empty liquor bottles, mostly vodka, but also beer bottles.

‘Make yourself at home,’ JR tells me after spotting me standing there, a little unsure where I should go. He attempts to move some cloths from the sofa, but only clears a small space. ‘Sit there,’ he says handing me the Playboy magazine.