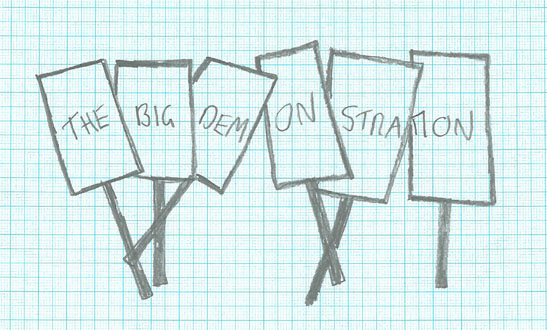 Twelve people carrying picket boards, banners and leaflets sit and stand on the 6 train as it makes its way down to midtown. They are of mixed race, mixed age and mixed gender. Some look excited as the train shoots along swinging passengers this way and that. Others look simply indifferent. At Grand Central Station we all get off, gathering together on the platform to make sure nobody is left behind. Once everybody is accounted for we make our way up to ground level. The excitement builds. The mission for the day is to be heard, to be accounted for. This morning, Mayor Bloomberg is unveiling his new ‘Ten Year Plan’ for reducing homelessness in the city of New York. He is doing this unveiling in the Hyatt Hotel above Grand Central Station. He has invited many of his peers to join him for breakfast at the Hyatt. It’s a big deal curing homelessness, and it must not be done without the accompaniment of a warm breakfast and freshly squeezed juice.

Picture the Homeless are not so much angry about the contents of the plan and the elaborate well fed unveiling of it. They haven’t yet seen it the plan or the breakfast menu. Apart from the team that put the plan together, nobody has. Picture the Homeless are angry because they weren’t consulted about the contents. They are angry that yet another mayor has come along waving a flag and hollering homeless cures without having even speaking to the homeless or the key organisations that already work with the problem. It’s a point they have plastered on their banners and flyers.

Consequently, PTH is here in loud force. They are not only vocal, they are colourful, armed with fluorescent orange, green and yellow flyers. On the front of the flyers is a large black and white photograph of a wrought-iron garden table with two chairs.

Nobody sits at the table, hence the caption above the image: Once again we weren’t invited.

The Hyatt is a four-star hotel. Upstairs the mayor and his merry men are having their breakfast conference. Downstairs the not-so-merry men and women of Picture the Homeless hold a no-frills conference.

‘OK,’ begins Lynn. ‘Listen up. What we need here is press coverage. Leroy, Jean and Hugh, you guys have your routine memorised, so get yourself in front of the cameras as often as you can. Do interviews wherever possible.’

The hotel is incorporated into the Grand Central terminal building. The team spread out around the hotel, handing out flyers to anybody that will take them.
Sam J. Miller, a fresh-faced white boy in a pinstriped suit and dirty-collared shirt, is the Organiser of the Housing Committee of Picture the Homeless. ‘OK, I’m going into the Hyatt to flyer. Who’s with me?’ he asks. Then to me he says, ‘Alan, why don’t you come and help me?

He is a handsome-looking fellow, Sam, with his short, waxed hair and neatly trimmed beard, if a little excitable – he is not homeless himself, but he is passionate about the cause.”

“Sir, good morning, important news on the mayor’s homeless plan … Sir? Miss? Madam? Important news …’ Sam is greeted by a long run of apologetic smiles. Only one woman takes the flyer, looks at it as she walks away and then screws it up into a ball while shaking her head. There’s another man shaking his head. On his jacket he wears two badges: one that reads in capital letters ‘HYATT’, and another that reads ‘SECURITY’.

‘You can’t be in here with this. This is private property and you have to leave.’
‘Why?’ asks Sam belligerently ‘I’m not bothering anybody!’

‘I just told you why. This is private property and you can leave or the police will arrest you for trespassing.’ Sam doesn’t need to look around for the police. He already knows that half of NYPD’s finest are stationed around the hotel. But what is a cause without at least one arrest?

He says, ‘But I’m just flyering. I don’t understand the problem.’

‘I’m not explaining it again,’ the security guard says. Then in a deep booming voice he adds, ‘Leave! Now!’

‘Do you even know what I’m flyering about? This is a serious issue!’

‘It don’t make no difference what your flyers say. This is private property and you are trespassing.’

‘Do you not care about the homeless?’

‘Right now all I care about is getting you off the property.’ The security guard looks indifferent. It isn’t so much that he doesn’t care, but he has a low-level secure job that. If he keeps his head down he might be able to keep it. He doesn’t seem so proud of his suit or badges, but he does seem to prefer them to the shabby outfits of the Picture the Homeless crew milling around the hotel entrance.

‘Well, maybe you should read a flyer and …’

‘Get out now!’ the security guard shouts.

Sam joins the other group members outside.

‘I just got totally busted, they threw me out,’ Sam says to Linda, the organisation co-director and Sam’s boss.

‘Well, what were you doing in there? Now it’s closed to all of us and we’ve only been here five minutes. What happens when I need to go in there? They’ll be watching us.’

‘It doesn’t matter, they can’t stop you going in there, it …’

‘Yes, they can stop us. It’s private property.’

‘No, but I wasn’t in the hotel. I was just off to the side by the entrance and they threw me out.’

‘Right! I’ll flyer the entrance to the hotel from the Grand Central walkway, inside the station. They can’t throw me out of there because it’s private property. Who’s coming with me?’

If Sam had a sword he would cry, ‘Chaaaaarge!’

Around the corner to the main entrance, on 42nd Street, a policeman stands tucked slightly into a nook. He enjoys his work, which today amounts to smiling and greeting any female that looks like she might have once graced the covers of Maxim.

‘Good morning, mam, how are you today?’

He smiles away at the women, who for the most part find him cheeky and charming and smile back, happy, at least, that they are getting something for their tax dollars.

About fifteen yards up from the community flattery officer stands Jerome. He leans out slightly on his right leg, holding out bright orange flyers in a way that people can read the title on the back of them:

WHY AREN’T WE AT THE TABLE?
You can’t solve homelessness without involving homeless people. 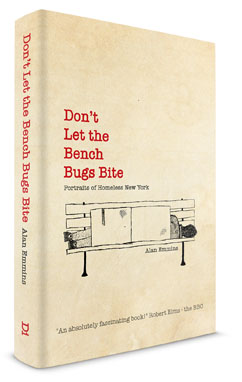