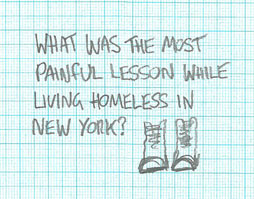 When I first stepped onto the streets to begin my project living homeless in New York, I was armed with various snippets of obvious advice: like keep your possessions attached while sleeping, otherwise they will be stolen.

This was a mistake. What I should have done was take them off and tie them to the straps of my backpack. But for some reason, in those first few days of fear, exhaustion and confusion, the problem of how to secure my shoes baffled me.

My feet started to feel a sore on day three, but not enough to cause problems. But then I got caught in a summer downpour. Just a short time walking around with my already sore feet in wet shoes took things to another level, and I began walking with a shuffle common among the homeless.

It hurt to walk. It hurt to take my shoes off. It definitely hurt to put them back on. Just looking at my feet caused me to groan pathetically.

The golfer, Gary Player, said it best when he said, “We’re designed to move.”

Understanding this is very important. When our movement is restricted for any prolonged amount of time our general health quickly starts to decline. This can further restrict our movements, which can lead to much more serious health risks like ulcers, deep vein thrombosis, cardiovascular disease.

I began filling my water bottle everyday and taking the time to wash my feet and get them dry. I spent long periods in parks with my shoes and socks off. They got better quickly, but they hurt for the rest of the project and for a little while after.

For the truly homeless, who are pounding the pavements year round, taking good care of their feet is a challenge. You can’t air them and wash them in the park when it’s zero degrees.